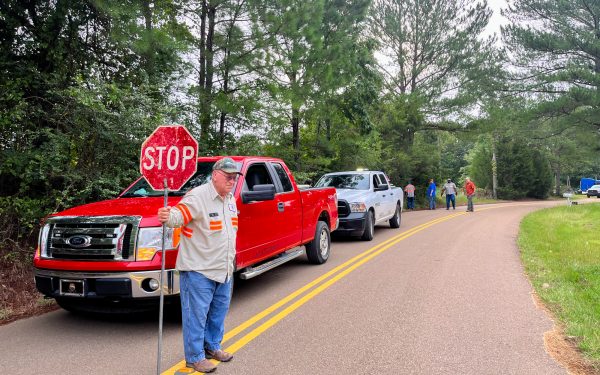 A Day in the Life: A Rainy Day with Lafayette County’s Roads Department September 29, 2022

Way back in the Old Kingdom of ancient Egypt around 2400 B.C., something big happened: people began paving roads.

To streamline pyramid and temple construction, ancient Egyptian builders created a road for transporting stone from quarries to building sites. Since then, technology has transformed road construction. Between asphalt, painted lines and traffic lights, little about today’s roads would resemble that first Egyptian one.

If, however, employees of the Lafayette County Road Department somehow traveled back in time to compare notes with those ancient Egyptian road builders, there’s at least one thing they could agree on: Rain is bad news when it comes to making and maintaining roads.

Rain means it’s hard to make progress on projects. Except in emergencies, you can’t run equipment. The same goes for putting down asphalt and painting finished roads. Rain also brings on washouts, where excess water loosens the dirt and gravel underneath a road, destabilizing its foundation.

So, what’s a road crew to do on a rainy day? 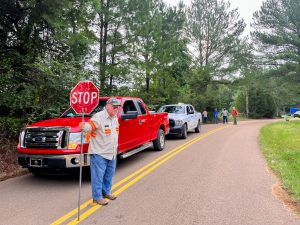 One wet morning late this summer, County employee Chad Threlkeld explained: “On a rainy day, we do a lot of road checking, seeing what’s wrong, taking notes and putting them down. But we’re also going to trim some limbs on the road with a pole saw here in a little bit.”

A foreman for the Roads Department, Threlkeld oversees one of the five districts that cover the County. His district stretches all the way from the department’s HQ on Highway 7 South to Pontotoc, in the area between Highways 30 and 334.

“We fix washouts coming up to the road, putting culverts in all` the time. It’s something all the time,” Threlkeld said. “Fixing potholes. I used to be on the asphalt crew and did a lot of blacktop in the County.”

The crew also cuts back limbs and removes other roadside debris that impacts driving conditions. This frees up time and energy for county employees focused specifically on road clearing.

“We’ve got a tractor that does most of the road clearing, but he stays so busy,” Threlkeld said. “We try to help him out as much as we can.”

In addition to responding to maintenance calls and urgent requests, Threlkeld’s team completes long-term projects to ensure that roads stay up-to-date and easy for drivers to navigate. 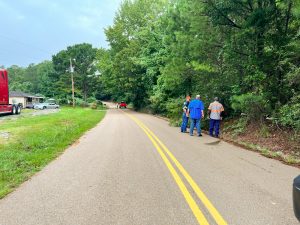 Photo: Clear days are ideal for addressing issues on County roads, but the weather is not always this agreeable.

One of their largest recent projects was re-topping the asphalt on County Road 231, where Camp Hopewell is located. The crew widened the shoulders as much as possible and filled holes that arose during that process, then refinished the road with Double Bituminous Surface Treatment, known as DBST or White Rock 100.

Another larger project still in progress is a bus turnaround on a county road off Highway 278. With the assistance of North East Power, Threlkeld and his crew have cleared the area to make way for the turnaround. Once the power company relocates an existing light post, they’ll finish the project. 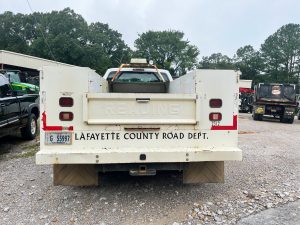 Photo: When storms down trees and limbs on County roads, residents are sure to see these trucks.

“We cleared it—probably seven or eight loads of trees and brush that we took out of here,” he said. “When they get the light pole moved, we’ll come out here and finish the rest of it and get it to where people can turn around.”

When Threlkeld pulled up to where his crew was working, the quiet morning air was punctuated by the roar of pole saws—essentially, chainsaws on four- to five-foot poles. The crew was trimming back limbs that had begun leaning onto the road.

“Everybody works together really good,” Threlkeld said. “That’s one thing that’s nice about the job, too. When somebody’s doing something, the other guys are usually jumping in to help.”

James Stone, a seasoned veteran of the Roads Department, came over to talk with Threlkeld. He was eager to run a motor grader, used to level out gravel roads, on County Road 225. But Threlkeld, checking his radar for the day, was hesitant to risk running equipment.

“We’ll get it all graded, then a flood will come,” he said with a laugh. When it comes to roads and rain, it’s best to be cautious.