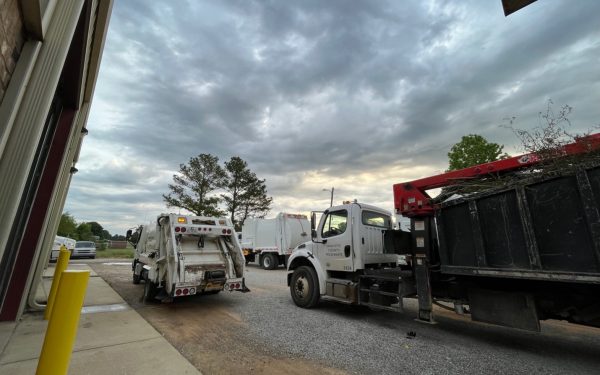 A Day in the Life: On the Road with Lafayette County’s Solid Waste Department June 7, 2022

A day in the life: On the road with Lafayette County’s Solid Waste Department 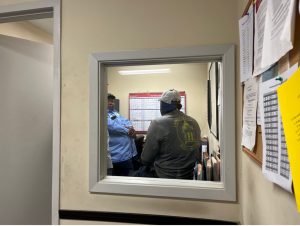 While much of Lafayette County was still sleeping, the County’s Solid Waste & Recycling crew started their Monday. The team, who will soon leave on routes crisscrossing the County, arrived at the department’s facilities located off of Highway 7 and clocked in by 6:30 a.m.

For so early, the mood was surprisingly upbeat. The drivers awaited any updates on their routes, joking with one another and sipping coffee. They’d soon be picking up garbage in their trucks for the rest of the morning.

While it varies from day to day, everyone usually finishes their route between 11 a.m. and 12 p.m. and gets back home by 3:30 or 4 p.m. They run their routes every weekday except Wednesday. Tuesday is the longest and Thursday the shortest day.

Eric “Tank” Woodall  is a team leader for the department and has worked for the County since February 2021. Unless a truck is down or new houses have been built, Tank follows the same route each week. 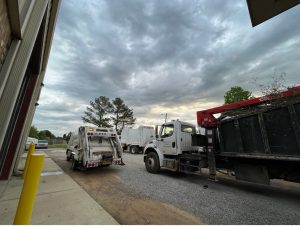 Photo: The fleet prepares to depart for collection under a cloudy sky.

The trucks rolled out by 6:45 a.m. so they could make their first pickups around 7 a.m. Throughout the mornings, Tank spends his time alone in the truck, following his route and making pickups. He said he not only doesn’t mind this aspect of the job but appreciates it.

“I like the whole job itself,” Tank says. “It’s laid back. You’re by yourself, you know. You’re not out in the weather.”

Working for the County is much less stressful than his previous job managing a local apartment complex. While he enjoyed it, the phone was “ringing 24/7 with something all day long.” He was also formerly a sanitation worker for the City of Oxford.

Tank typically listens to music—ranging from gospel and blues to country and rap. When he’s hungry, he has a basket full of snacks his wife chooses for him. Honey Buns, chips, granola bars and Uncrustables often make the cut.

“I’ve been drinking a lot of water lately, but usually I have some good lemonade. That’s my favorite drink,” Tank said. 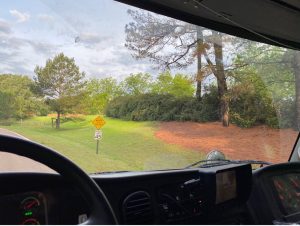 Tank’s Monday route goes toward Taylor, the small town of around 300 people just outside Oxford. On this route, he collects 400 or more cans, which translates to nearly eight tons of garbage. He tracks his stats on a counter on the dash.

Taylor is where Tank grew up, so he knows several people—both friends and family—on the route. He sees their trash but rarely sees them.

There is the occasional person up early enough to notice Tank as he goes by. On Monday, he saw his former supervisor’s parents and a friend he rides four-wheelers with who was rushing to get his can out in time. At one point, he passed some county workers from the Road Department and greeted them with a honk and a wave.

But most of the time, it’s just Tank and the road ahead of him.

“I’ve been here all my life and when I started here, I learned some roads I never knew existed,” he said.

While people are rare, dogs are a constant.

After making a pickup on Monday, a new dog appears and attempts to track Tank down.

“That’s the first time I’ve seen this dog chasing the truck, but it happens all the time,” Tank said. “We’ve got this one dog who tries to bite the tire!” 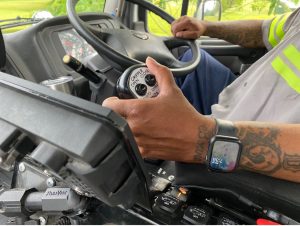 Photo: Tank operates the joystick that controls the truck’s arm.

At each stop, Tank slows down to position the mechanical arm attached the truck so that it can easily and firmly grab the trashcan, which is issued by the County in a standard size. He uses a joystick to the left of his seat to lower the arm, grip the can and dump it into the trucks’ hopper.

The steel arm, Tank said, is strong enough to pull a brick column out of the ground. Drivers must be especially careful maneuvering around residents’ mailboxes, cars and other belongings.

“It don’t look that strong, but it’s real strong, man,” he said. “You can barely hit something and knock it over.”

“When I first started, I said, ‘Lord, what I gotten myself into?’ I was looking at Brian—he was training me—and I was like, ‘Man, he’s making it look so easy,’” Tank said. “Then I started doing it and it wasn’t as easy as he was making it look. I had that can going all kinds of ways! But I was determined not to let it defeat me.”

And defeat him it did not. Not long after Tank started, he was moved up to his current position as a team leader. As a leader, Tank is tasked with ensuring his team is covering their routes and making extra trash pickups if a can is missed. 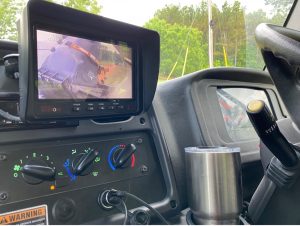 Photo: A rearview camera shows a trashcan being dumped into the truck.

While operating the truck’s arm, Tank can see each can as it gets dumped, then compacted, through a rearview camera situated in the center of his truck’s dash. This allows drivers to ensure all the can’s trash actually gets into the truck.

At most pickups, Tank said, there are no issues, which means he rarely leaves the truck. On Monday, for instance, he had to get out of the truck only twice, when a few boxes fell out of an overly full can.

Tank said that packing the cans correctly, turning them so the wheels face the house and having them out by 7 a.m. are the simple things residents can do to make the department’s work go as smoothly as possible.

The most common concern people have about sanitation work is the smell, but, since he is in his truck most of the time, Tank said he almost never smells the garbage.

“For the most part, you don’t have to smell it all day long,” Tank said. “But every now and then, you dump a can that makes you say, ‘Wow, what did I just dump?’”

To Tank, the worst is when a can is full of fish heads and guts. But even when that happens, he said, it clears up quickly. Tank also washes his truck at least twice a week to keep it smelling and looking pristine.

Video: Tank approaches a home and uses the truck arm to make a pickup.