In December, an urban forestry consulting firm analyzed the trees around the Lafayette County Courthouse, looking for indications of vitality, disease or damage.

Fulgham’s Inc., led by President David Fulgham, spent a day scanning the seven old trees that have provided shade around the historic courthouse for generations. “We’re using a radar system to sense the health of each tree,” said Fulgham whose services are aimed at measuring the long-term survivability of trees.

With a Ground-Penetrating Radar (GPR), Fulgham’s performed trunk scans and root maps for each tree. This non-invasive procedure helps produce an accurate picture of the trees, including any damage or decay that could spell disaster years down the line.

“Without data, you can only guess about the situation of a tree, but when you can use technology to look deeper, you can make better decisions,” Fulgham said.

It’s an advancement that could change the game for preservation of historical sites. Fulgham’s has analyzed trees at a number of significant locations, including the beloved Friendship Oak in Long Beach, Miss.

This specialized tree service is used as a yearly inspection for some, much like an annual check-up. This is the first time, though, that the courthouse’s trees have been analyzed with this technology.

It takes at least a half an hour to scan for a tree’s roots. Then, the team moves onto the trunks, using an antenna to produce images, much like an MRI would. Then, they get to work demonstrating the data in a comprehensive report.

What the Radar Found

The reports show what lies beneath our feet: a complex, interconnected root system tied directly to the longevity and life of a tree. Fulgham’s data indicates that, though the trees show impacts of their harsh urban location, there is no cause for major concern of their health.

A tree’s roots are critical for nutrient absorption, structural support and water intake, all necessary to ward off tree loss. Because the courthouse trees are surrounded by concrete and asphalt, as well as high levels of foot traffic, their root density is lower than a tree in a wooded area would be.

According to the report, the root density for each tree at the courthouse averages close to 1 root per foot, which is normal for their conditions. “Most roots were seen in the top 16 inches of the soil profile,” Fulgham reported. 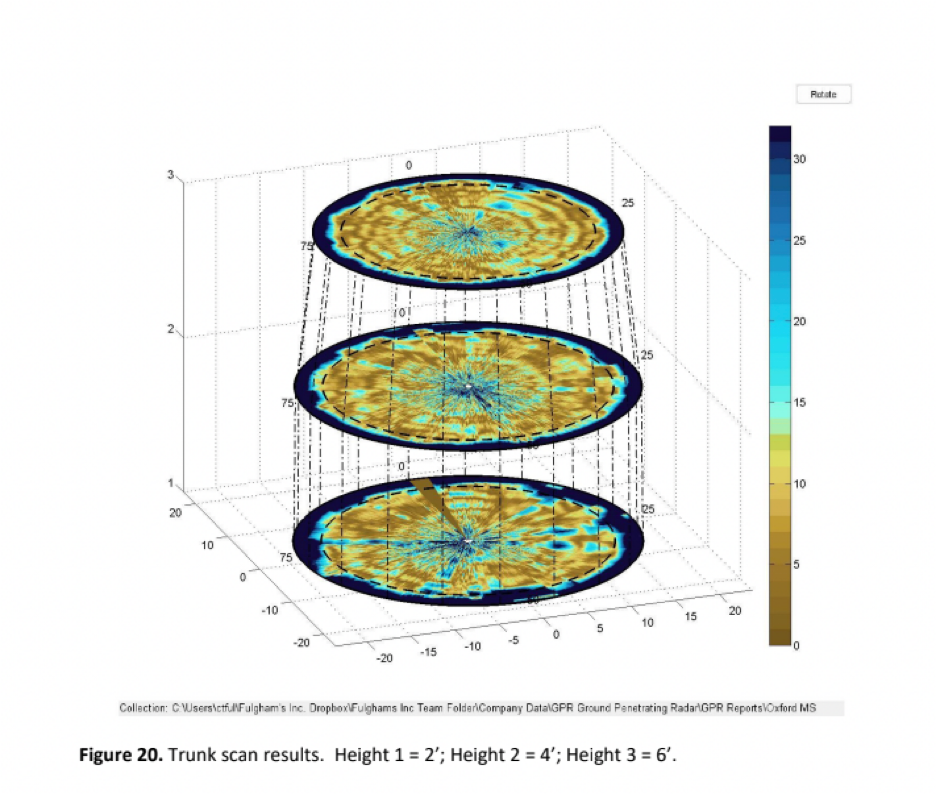 Fulgham’s performed trunk scans of each tree at 2 feet, 4 feet and 6 feet, looking at the wood’s density. Where their radiogram shows tan to brown color, the density is average. Cyan to blue colors indicate a lower density. Though each tree shows varied densities, none present signs of being significantly compromised.

To remediate the compaction that occurs with the high foot traffic, Fulgham’s will visit and treat the trees a few times a year. With the information they’ve collected and the care they provide, the county’s courthouse trees are well-situated to avoid the damage and decay that can come with age.