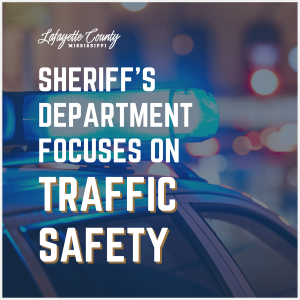 Many Lafayette County residents and visitors may think specifically of downtown Oxford and West Jackson Avenue as pain points for traffic concerns, most notably when the University of Mississippi is in full session. Though football weekends especially threaten to suffocate traffic flow, these days, Oxford does not really have many “off” weeks, in terms of activity. But growth and bustle continue to sprawl into the county, increasing the number of people on roads outside the city limits, as well. And, then, there are visitors coming and going to and from Oxford.

With these factors in mind, the Lafayette County Sheriff’s Department has initiated additional efforts overall, including during big Ole Miss sports weekends, to improve the safety of others and traffic safety at night. The Sheriff’s Department has been working with the Oxford Police Department in working more driver’s license checkpoints to prevent reckless driving and impaired drivers from getting too far.

“We are out there to be sure people are safe, not just to write tickets,” says Sheriff Joey East. The Sheriff’s Department has seen more fast-moving accidents on the highways with impaired drivers than any other drivers.

With the county being home to more than 50,000 people now, drivers need to be extra careful, East says—especially with the presence of many young drivers around the county. The Mississippi Highway Patrol also has been assisting on major roads to keep peace of mind between the ditches.

“I think we have one of the best departments in the state,” East says. “The enforcement here is different. You hear about community policing, but what the sheriffs do is police their community, look for alternatives for arrest, spend time with people and make relationships.”

For more information on the Sheriff’s Department, you can  visit their website.